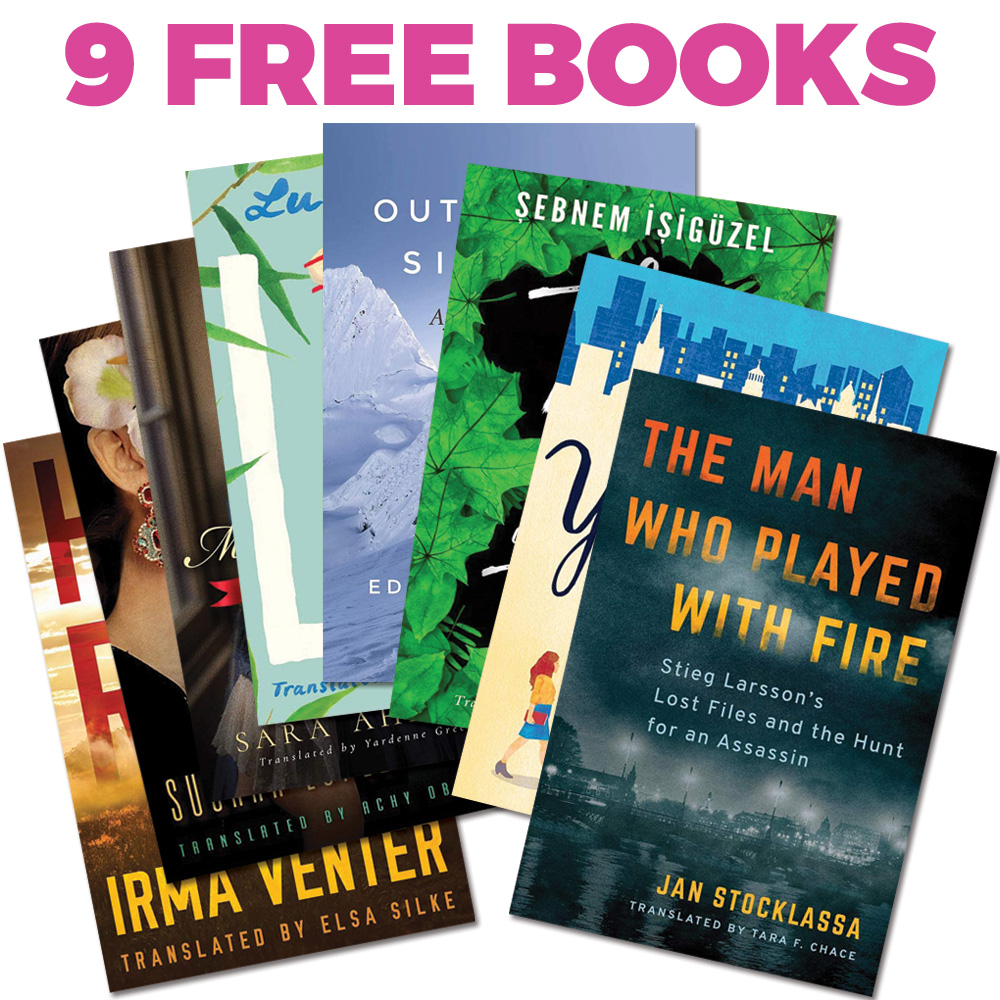 World Book Day is a day to celebrate books from around the world! Let's kick up our heals to all the amazing authors worldwide who spend their nights quietly writing so we can have countless books to read! What a time to be a reader! There are so many books available now and many being translated into other languages.

This week Amazon is celebrating World Book Day but giving away 9 different books for free. That's right, totally free. No need to be a member of anything! Go on, take a look and see which ones you might like!

Hard Rain by Irma Venter - "Chaos, murder, and a hint of sizzling romance descend on East Africa in this electrifying page-turner of a mystery."

The Man Who Played With Fire by Jan Stocklassa (Steig Larsson) - "When Stieg Larsson died, the author of The Girl with the Dragon Tattoo had been working on a true mystery that out-twisted his Millennium novels: the assassination on February 28, 1986, of Olof Palme, the Swedish prime minister. It was the first time in history that a head of state had been murdered without a clue who’d done it—and on a Stockholm street at point-blank range."

Life by Lu Yao - "In this first-ever translation of Lu Yao’s Life, we meet Gao Jialin, a stubborn, idealistic, and ambitious young man from a small country village whose life is upended when corrupt local politics cost him his beloved job as a schoolteacher, prompting him to reject rural life and try to make it in the big city. Against the vivid, gritty backdrop of 1980s China, Lu Yao traces the proud and passionate Gao Jialin’s difficult path to professional, romantic, and personal fulfillment—or at least hard-won acceptance."

Your Perfect Year by Charlotte Lucas - "A man consumed by a meaningless life is going to do something he’s never considered doing before. He’s going to enjoy the day…"

The First Mrs. Rothschild by Sara Ahoroni - "In this award-winning historical saga, passionate young lovers in a Jewish ghetto rise to become the foremost financial dynasty in the world."

The Price of Paradise by Susana López Rubio - "Havana, Cuba, 1947. Young Patricio flees impoverished Spain and steps into the sultry island paradise of Havana with only the clothes on his back and half-baked dreams of a better life. Blessed with good looks and natural charm, he lands a job as a runner at El Encanto—one of the most luxurious department stores in the world."

Out of the Silence: After the Crash by Eduardo Strauch - "It’s the unfathomable modern legend that has become a testament to the resilience of the human spirit: the 1972 Andes plane crash and the Uruguayan rugby teammates who suffered seventy-two days among the dead and dying. It was a harrowing test of endurance on a snowbound cordillera that ended in a miraculous rescue. Now comes the unflinching and emotional true story by one of the men who found his way home.

Four decades after the tragedy, a climber discovered survivor Eduardo Strauch’s wallet near the memorialized crash site and returned it to him. It was a gesture that compelled Strauch to finally “break the silence of the mountains.”

The Girl In The Tree by Sebnem Isiguzel - "From an award-winning Turkish novelist comes a powerful English-language debut about a girl’s coming of age amid violent unrest—and her unexpected escape."

Along The Tapajós by Fernando Vilela - "Cauã and Inaê are a brother and sister who live in a small community along the Tapajós River in Brazil. Here, the homes are on stilts and everyone travels around by boat—even to school! When the rainy season comes, they must leave their village and relocate to higher ground for a while. But after moving this year, Cauã and Inaê realize they’ve left behind something important: their pet tortoise, Titi! Unlike turtles, tortoises can’t swim, and Cauã and Inaê are really worried. So the pair sneaks back at night on a journey along the river to rescue him. Will they be able to save Titi?"

Then don't forget your FREE monthly book if you're a Prime member!

Just head over to the Amazon First Reads page to choose your book this month! Happy reading!