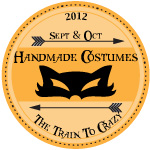 Today we have a special guest, Kim, from Seven Thirty Three showing us how to make a Mermaid costume. This easy DIY mermaid tutorial is fabulous! Don’t forget to check out the other costume tutorials in this series!

This past year my daughter requested a Mermaid Costume for Halloween.  I was going to nix that idea because hey, it snows most Halloweens here in Vermont!  But then I got to thinking that I could probably make a pretty easy Mermaid costume.   Anyway, not only did I think I could create a warm one, but one that didn’t restrict movement.  After a little brainstorming and a quick mock-up of the tail I was ready to get to work.

You will need the following to make your own tail:
Emerald Lame
(I purchased 1.5 yards for my daughter who is a size 10/12 and I should have only purchased 1 yard)
1 Yard Batting {or the same amount of the Lame that you purchased}

Fold the fabric so that it is right side touching right side lengthwise.  First I grabbed a pair of my daughters pants and laid them down on the piece of Emerald Lame (which was still folded in half length wise).  I used this as my guide for the height of the tail.  I added 2 inches to the height.

Next I drew out the shape of my tail.  I then decided I wanted to be as symmetrical as possible so folded the fabric in half again and cut it along one side of my guides.

Unfold and you have your tail shape.  Lay your batting over the top and cut out a rectangle making sure to cover all of the tail.  Now you have a sandwich of batting and two pieces of right sides touching Emerald Lame.

My readers know I rarely pin, but feel free to do so. Sew all the way around, leaving a 3″ gap on the side so that you can flip it right side out.  I started at the tail because it seemed the most important and hardest area with the curves and such.  Trim off the excess batting (thank you for ignoring that I didn’t cut my rectangle of batting big enough so the top of my tail went off it… it didn’t hurt the integrity of the design, just a sign of caution for you! HA!).

Turn your tail right side out, and check the height on your child.  If it is laying where you want to (just below the belly button and not too long that it will get tripped on) then hand sew up your 3″ hole.

I added straps to the tail by cutting 2″ x 6″ strips, folding them in half length wise and sewing shut the long way.

I then spent more time trying to flip them right-side out than I did on anything else on this project.  You could always use some green ribbon.

Fold the fabric into the hole on either end of your strap and sew shut.

Now sew your straps directly onto the top corners of your tail.
That’s it, your tail is done! Ummm… maybe.
Once I got the whole ensemble on my daughter and she ooo’ed and ahhh’ed in the mirror for 10 minutes she said she loved it but… Ariel has that cool part where her upper body meets her fin and sort of notches away from her belly button… and I said “UGH!  You’re right.  I wish I had remembered that instead of going straight across at the waist.  I can’t cut out the notch now.”  She was  like “Darn! There isn’t anyway you can add fabric to make that work?” and I was like “No, not now and I can’t cut the notch because this fabric frays terribly.”  She still loved it and forgave me my error…. But I couldn’t stop thinking about it!  SOOOO, I went back down to my sewing desk and pulled out the fabric and cut out and sewed the curve of this shape:

{the vertical seam you see a few inches to the right of the fold is because I cut the piece too wide.  I sewed the vertical seam and cut off the fabric to the left.  The point should end in the center of the tail, and the edge needs to hit the edge of the tail.  You will need two of these).

Flip the fin piece right side out.

I was a bit apprehensive about actually attaching it because what if it didn’t work out the way I had planned… but this is me and I couldn’t not do it so away I went.  I measured it so it ended in the center of the upper tail and then starting from the side, sewed a straight line attaching it along the top.  I did the same to the other side and it worked EXACTLY as I hoped.  By this time my daughter was in bed, but I was so exicted I ran up to show her anyway.  She was like “that is SO awesome” and had to get up to give it a try.  So thank you to my daughter, Cassidy, for having this bright idea!

The Hooded Water Cloak was made generally following this tutorial.  I used fleece and it was super easy, no hemming needed!

Ready to add a little water to the costume?  Follow my tulle water skirt tutorial!