Yesterday was Independence Day here in the U.S. and I completely forgot today was Thursday. Each week Make It Wear It creeps up on me and for some reason I refuse to schedule them ahead of time. Sorry I didn't post it but we'll be taking a break from it until August. Keep coming back though because there will be SO many fun things going on here in July!

My kids woke up Tuesday morning and asked me to make them outfits for the 4th of July. I should have said, "No" but I said, "Let's go to the fabric store!" First off, the fabric store with four kids at lunch time BEFORE they eat is just a bad idea. Really bad. But we survived and managed to get some fabric. I didn't have time to calculate how much I'd need or how many pieces because all the crying from the little guy really distracted me. So I bought a lot.

We rushed home, washed it and then started sewing. They alternated sitting on my lap and I didn't get much done. So once they went to bed I set to mad sewing. By 10 p.m. I was done with 2 outfits. The last 2 are pretty simple and shouldn't have taken me long but they took forever. First my serger refused to thread. I have a Babylock so if the threading mechanism doesn't work, it doesn't work. I fought it for an hour then gave up. Then I tried doing some things I that didn't work out and finally decided on designs and finished around 4 in the morning. Did I mention I didn't use any patterns and decided not to do simple skirts. WHY was that?

At that point the baby was crying "ouch ouch. I want mommy" so not a lot of sleeping happened after that point.

The sun came up and I took the girls to the parade in our neighborhood. Baby was still not feeling well so didn't get to wear his outfit. 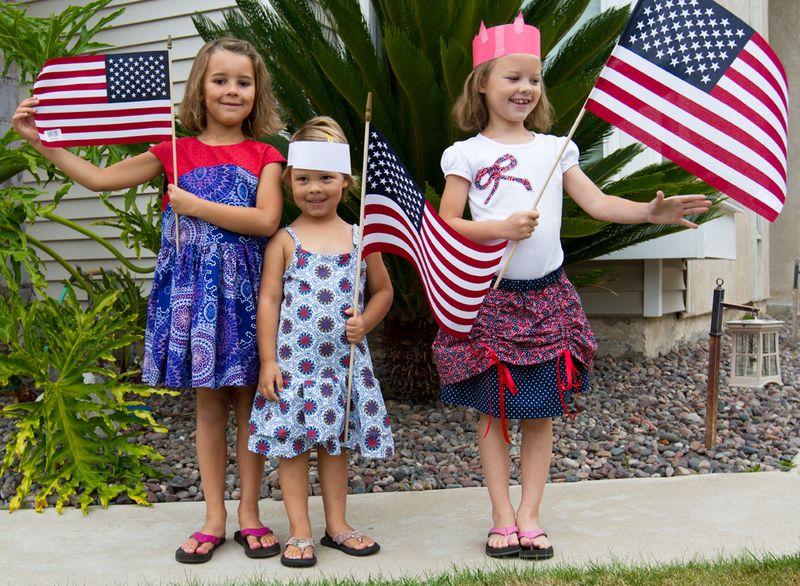 I think that dress on my left is one of my favorite things I've ever sewn. For whipping it up on short notice and drafting it myself it came together beautifully. See all the photos below. 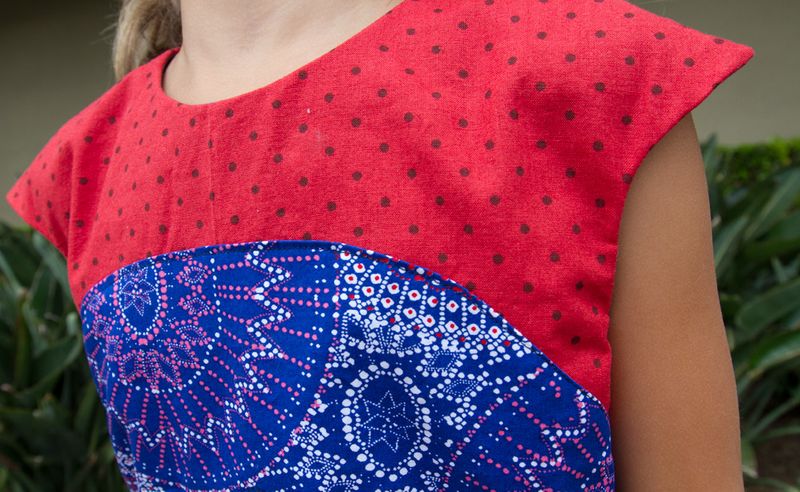 I love the pieced top. 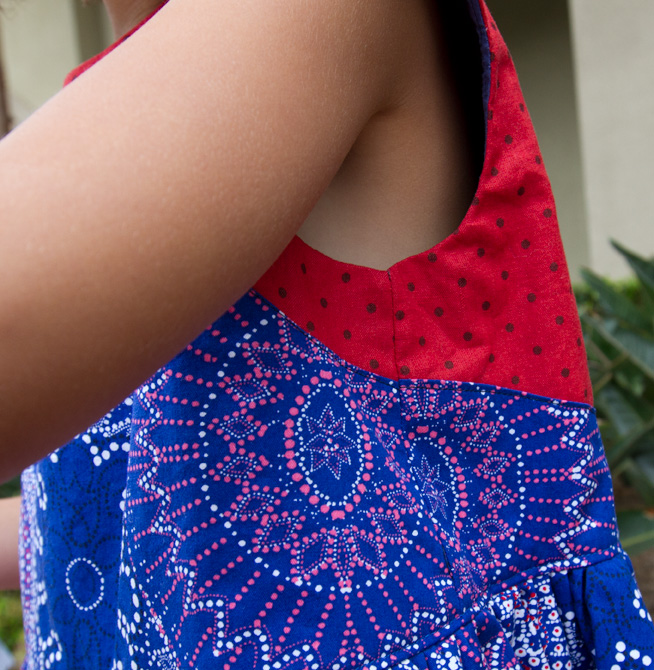 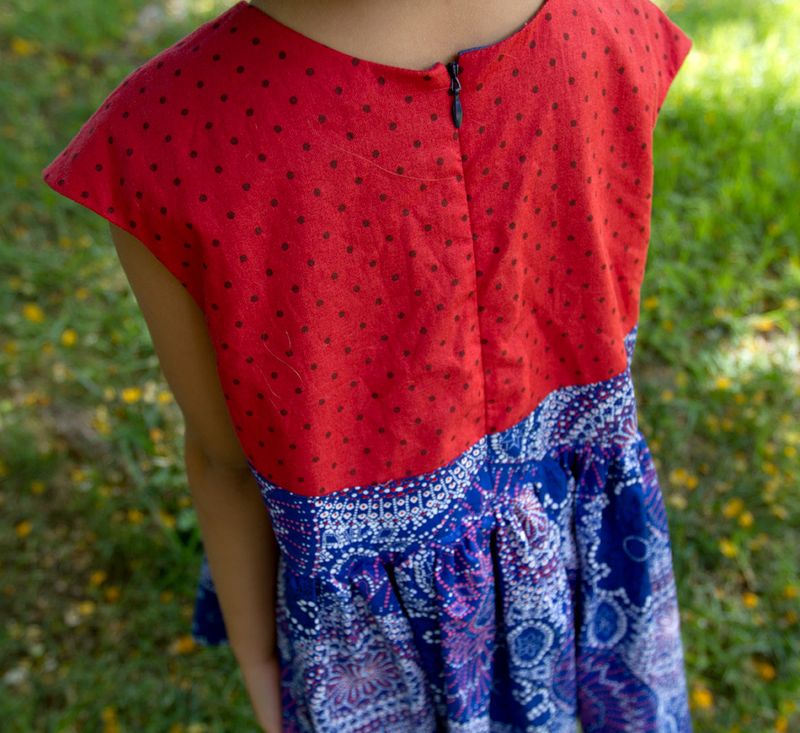 Such a fun dress. I really want to make more. 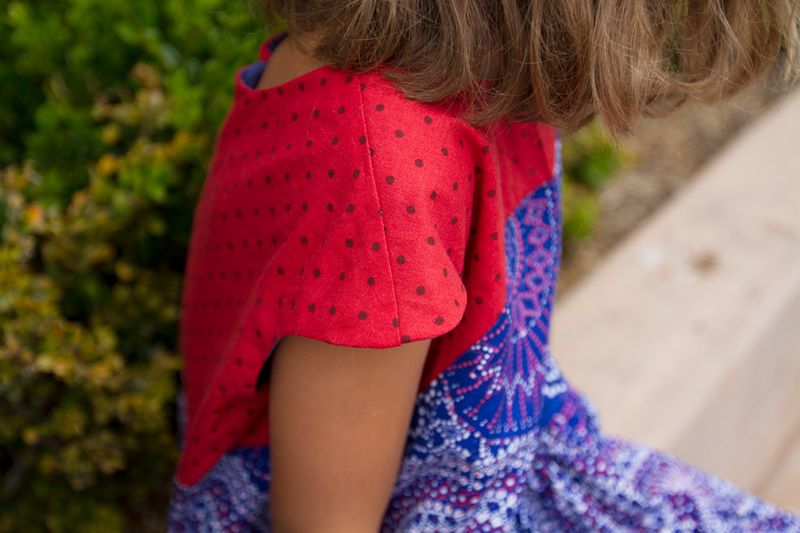 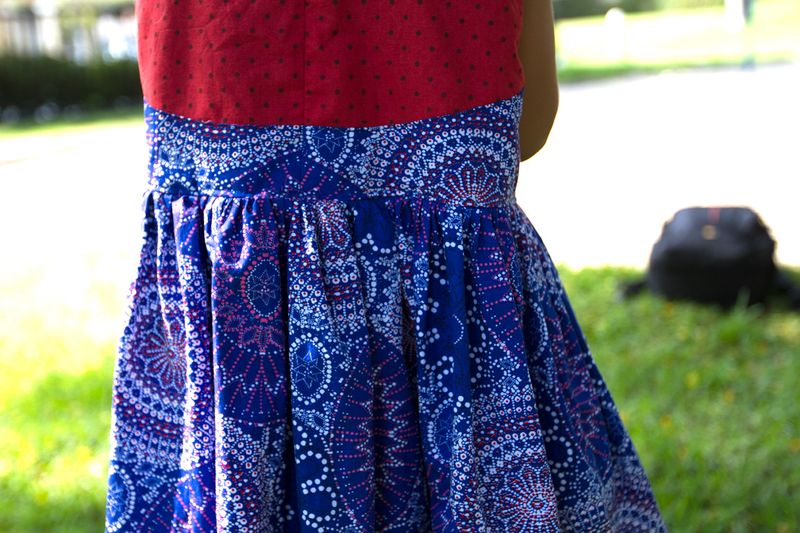 And this dress is so simple and cute. I know it will get worn at least once a week. 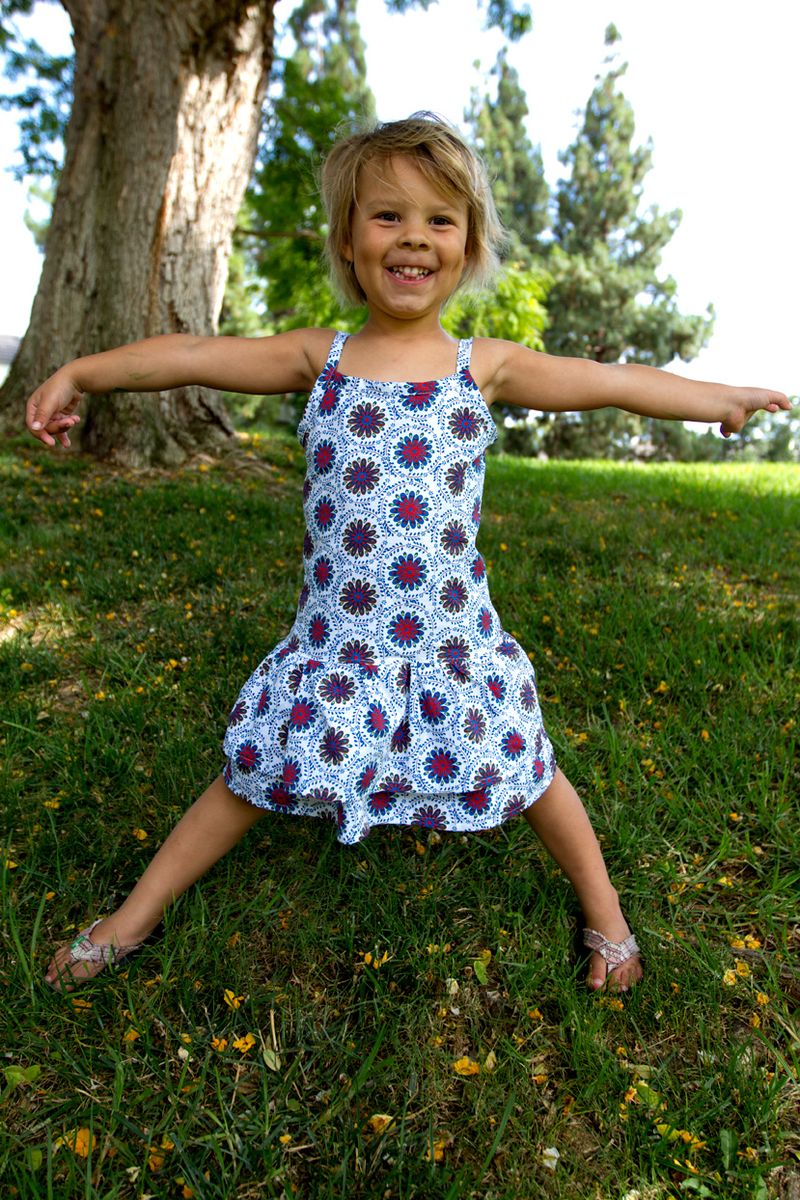 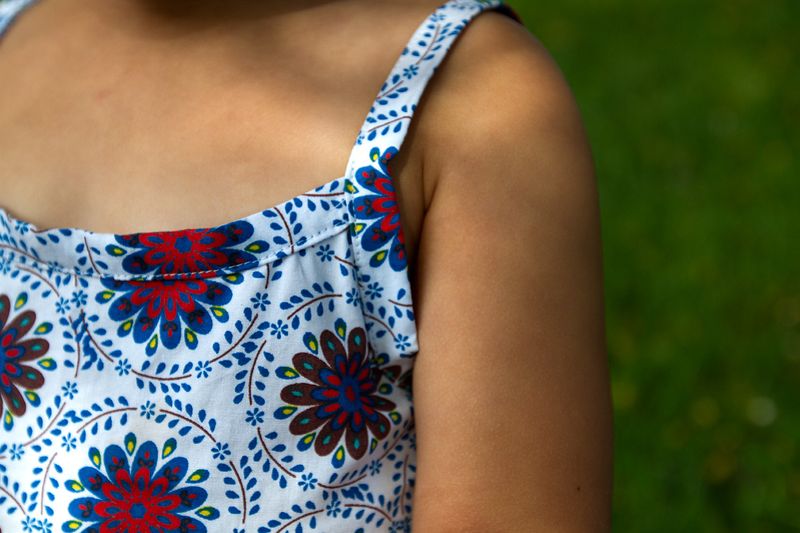 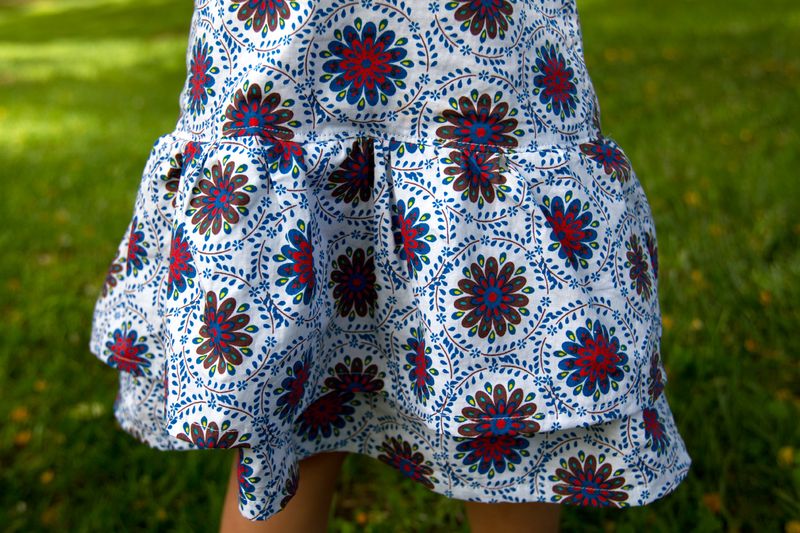 The little guy couldn't be without an outfit as well. I just made pants. I was going to make a knit shirt but see the note about the serger above. 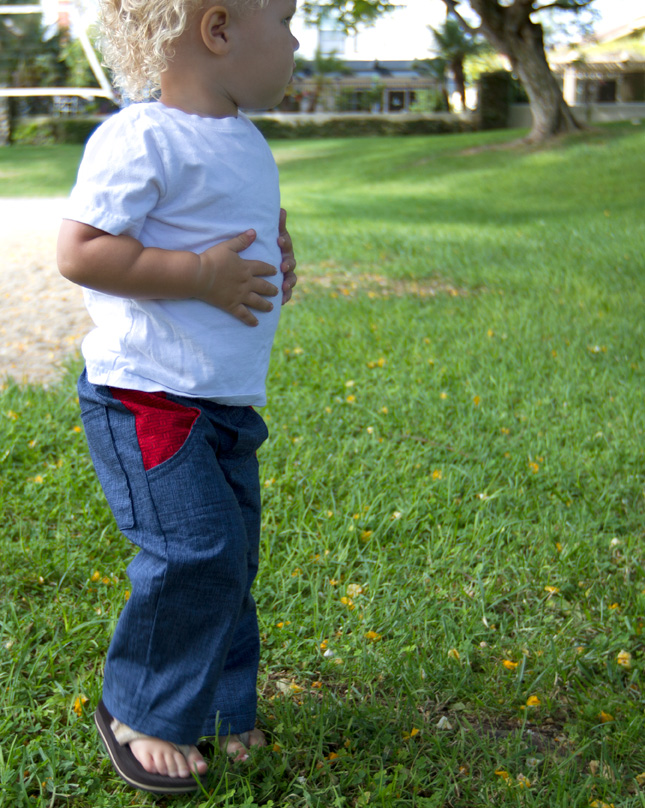 I know they are questionably femanine but I really wanted them to all have red white and blue outfits and so I needed to get red and blue onto those pants. 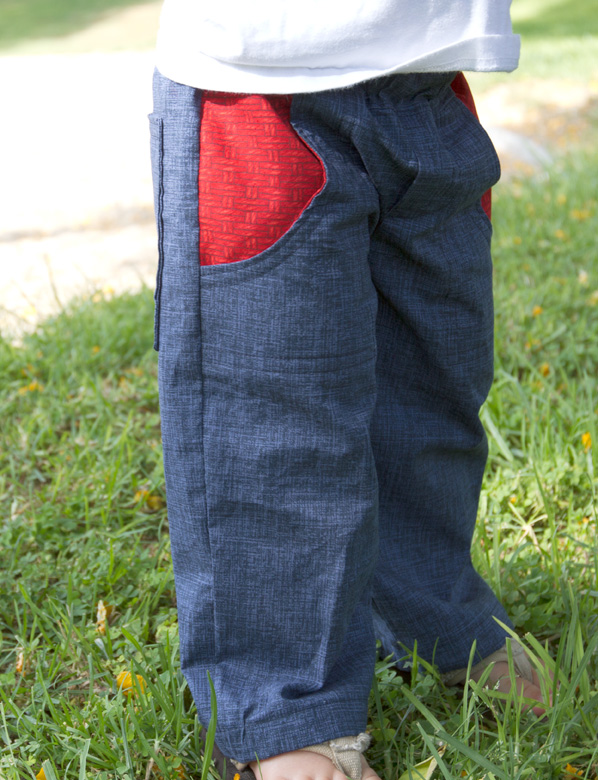 A tutorial is coming soon about that skirt so look for more photos then.

Like I said, I took the girls to the local parade. We saw some, um, interesting things. 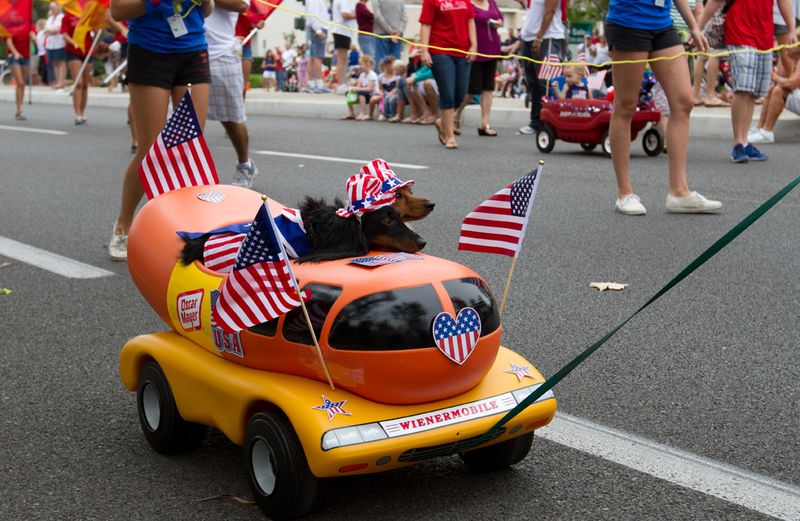 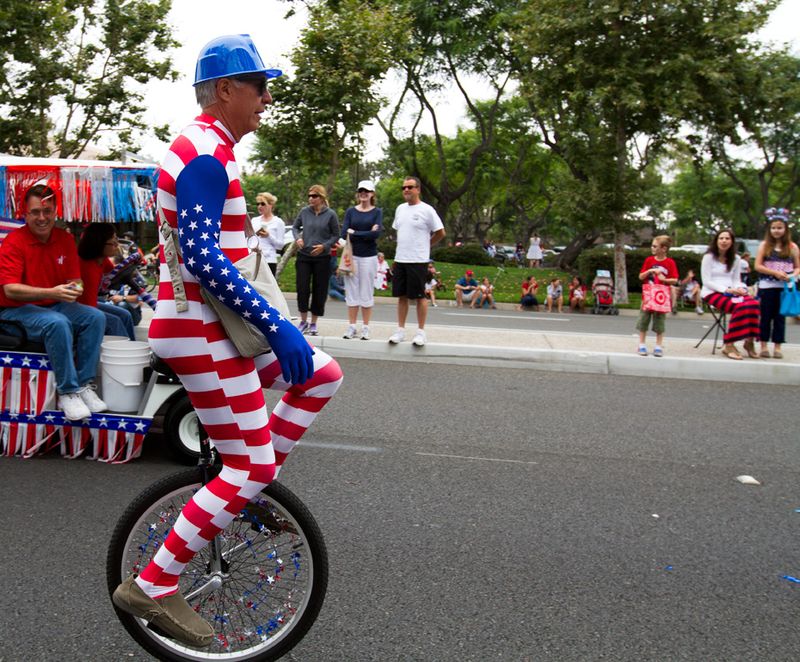 And the girls marched with their swim team. They wore their team shirts over their new outfits. Sniff, sniff. 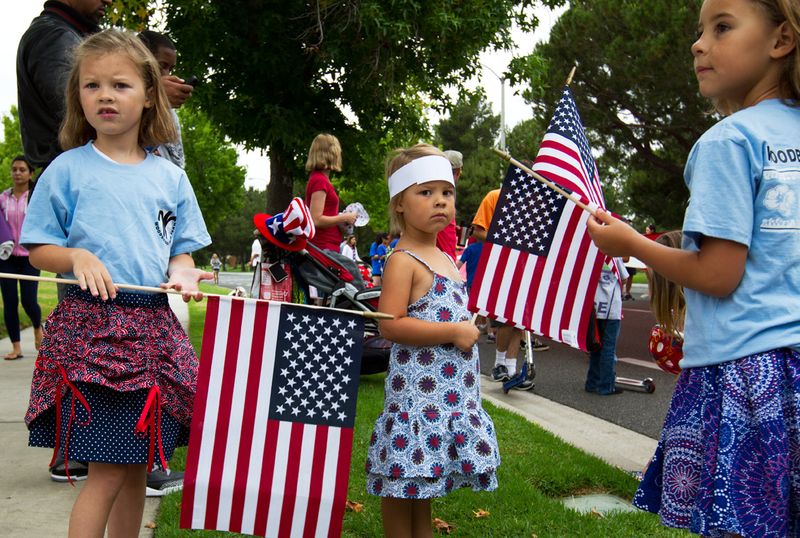 After the parade I attempted photos of the girls.  Unsuccessful. Then when the little guy was feeling better we went out to the park next door to attempt more photos. See below to determine level of success. 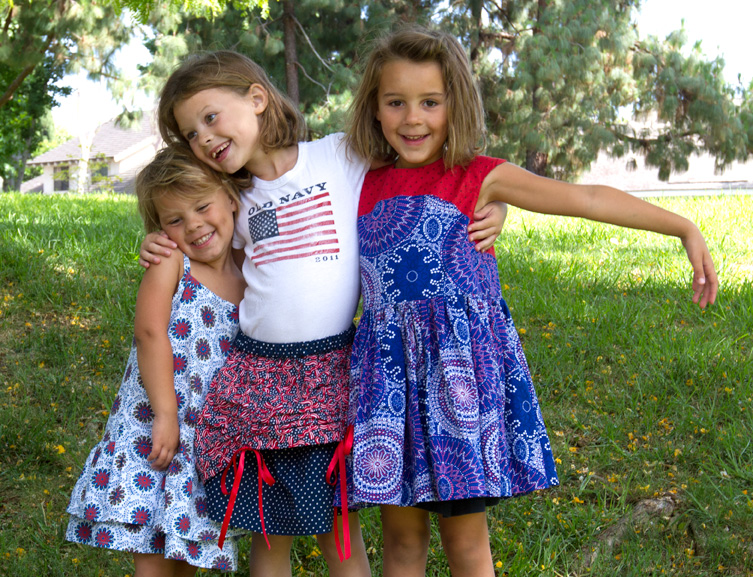 Notice we are now advertising for Old Navy. The nice (old stained) shirt I appliqued to match her skirt was covered in chocolate during our strawberry dipping session... And by the way, she picked out that skirt fabric. Insisted on it. So very festive. I tried to explain that we wanted fabrics you could still wear in August but she said she'd wear it year round and so I bought it. We'll see if she actually will wear that year round! 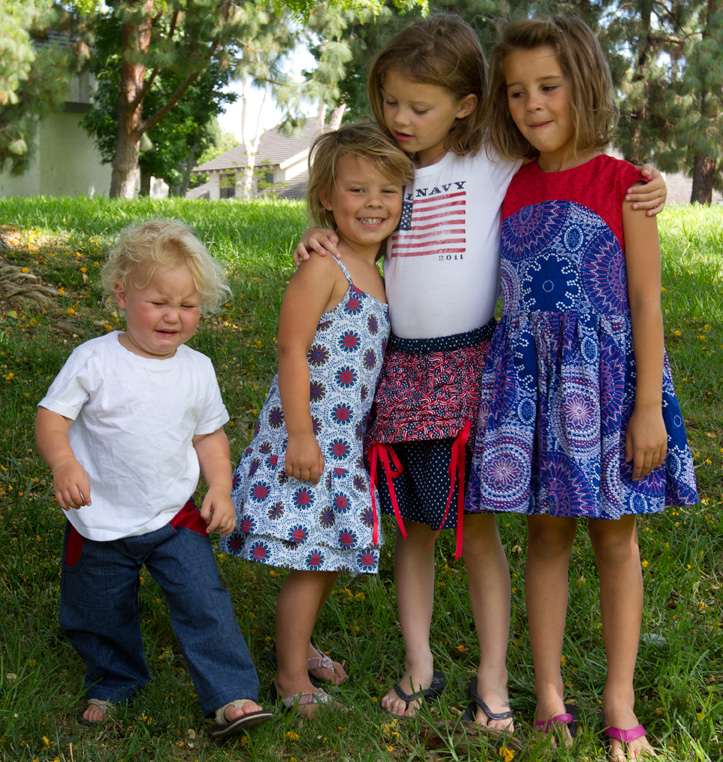 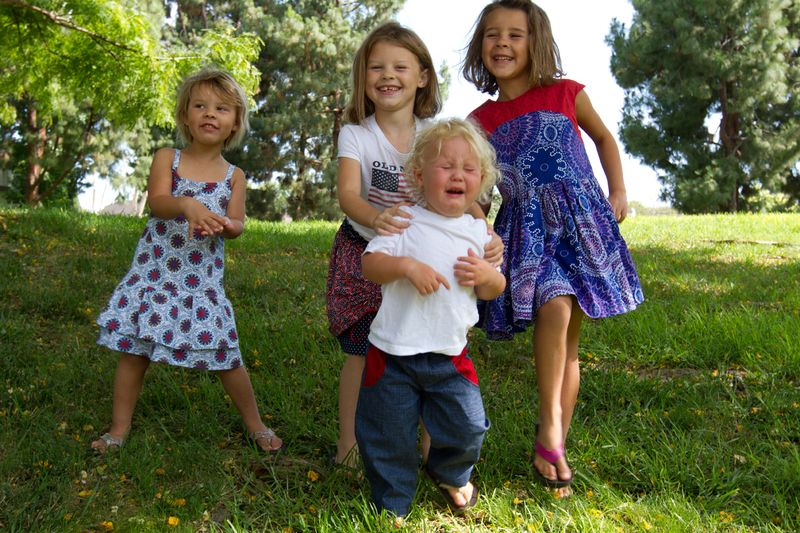 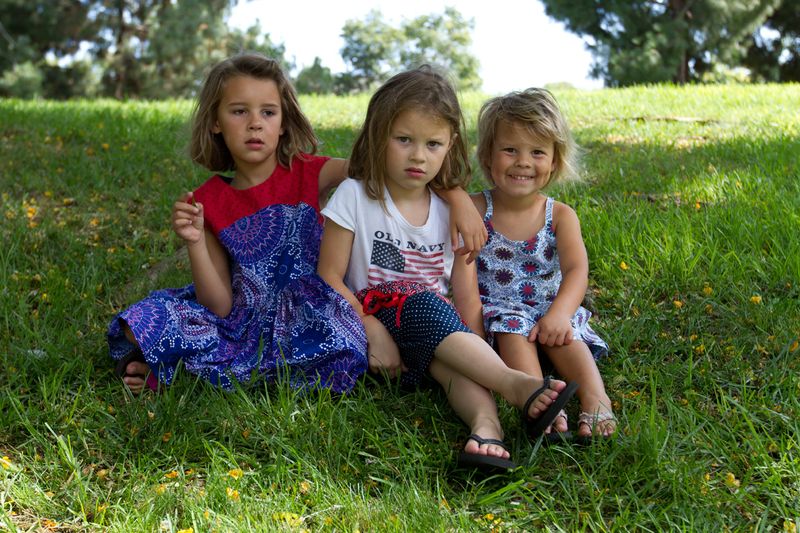 See that look? That says, "Mom, you're making my day miserable." So we took a break for frisbee and kites. Not enough wind but we didn't let that stop us. 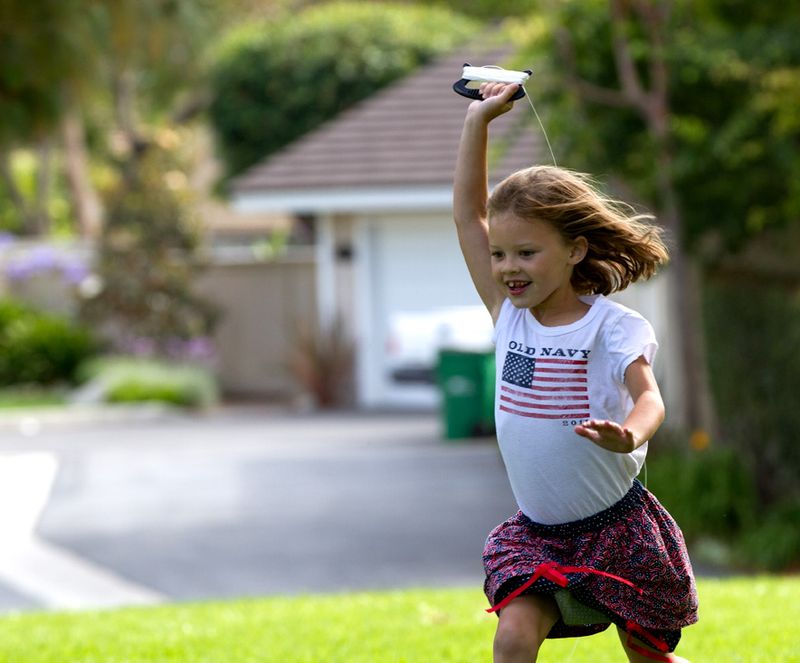 And then we fought over the one ball we brought. 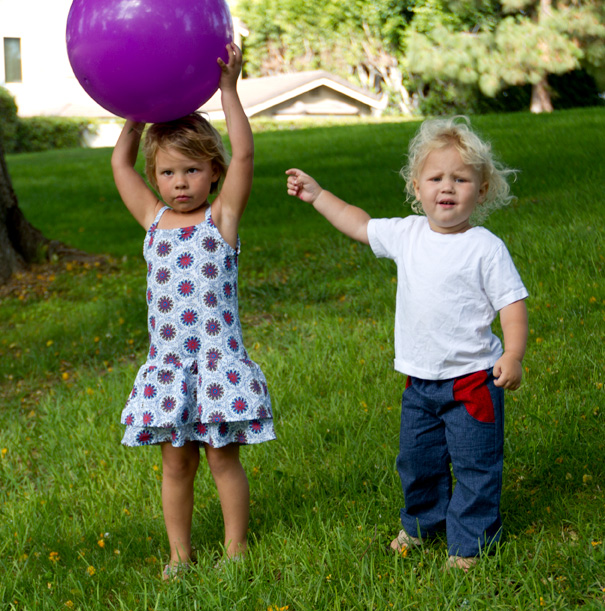 Tried to stab mom with sticks. Then my husband took my picture with the kids. See us back there? 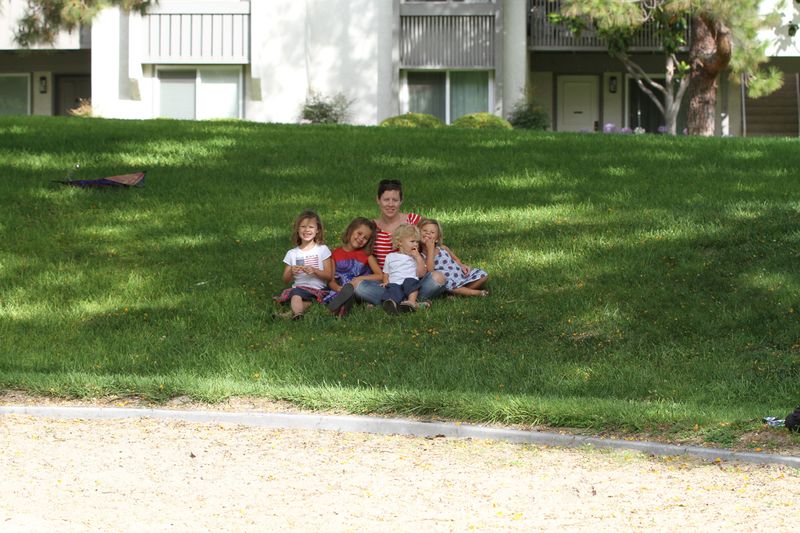 Oh here we are. 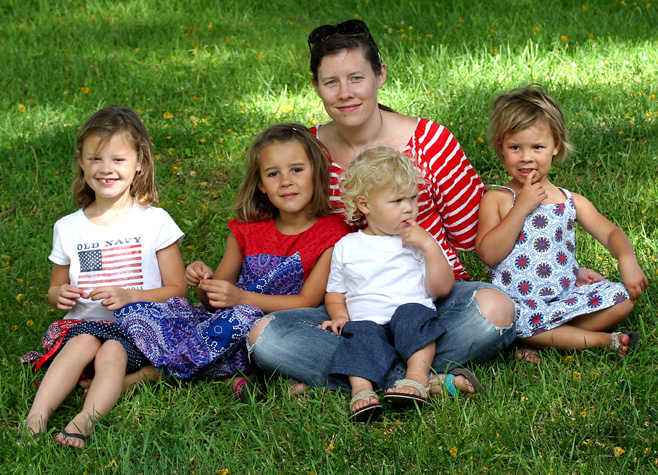 I tried to sneak out. 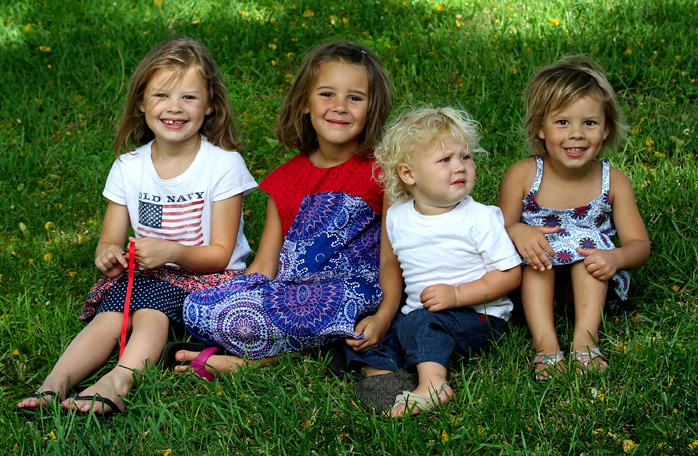 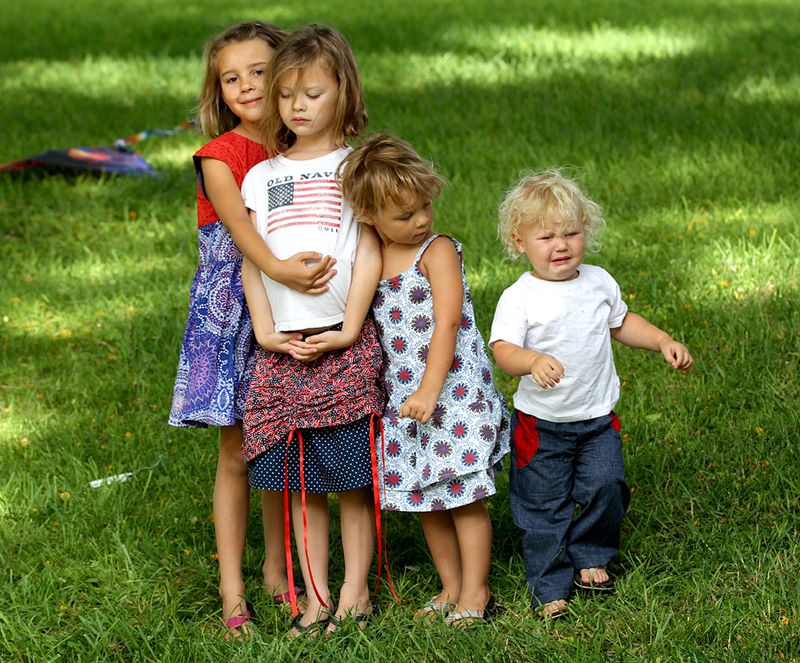 One still hanging in there. 2 rebelling and 1 in tears. Yep, that's about how family photos go! 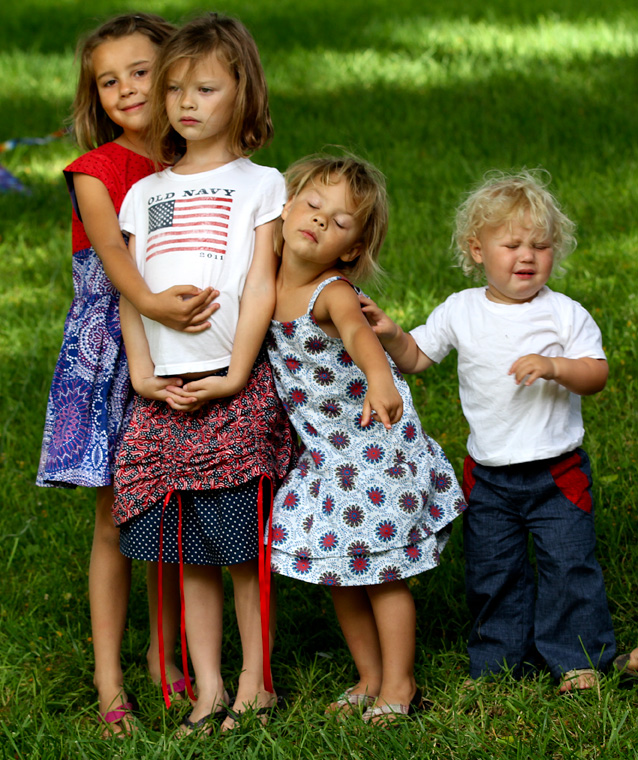 We finished the night off by watching our neighborhood firework show. AMAZING! I was so impressed. They really go all out. We are, of course, paying for it today that they stayed up until 10 p.m. last night.

How was your fourth of July?